Graphic novels, comics, manga, and wordless books are all contained in this collection.

What is a Graphic Novel, anyway? The short comic below, by Jessica Abel, will help you to identify the characteristics of a comic book or graphic novel in order to interpret the unique storytelling capabilities of the medium.

"What is a 'Graphic Novel?'" by Jessica Abel

Comic introduction to what comics are, how they work, and how to read them. 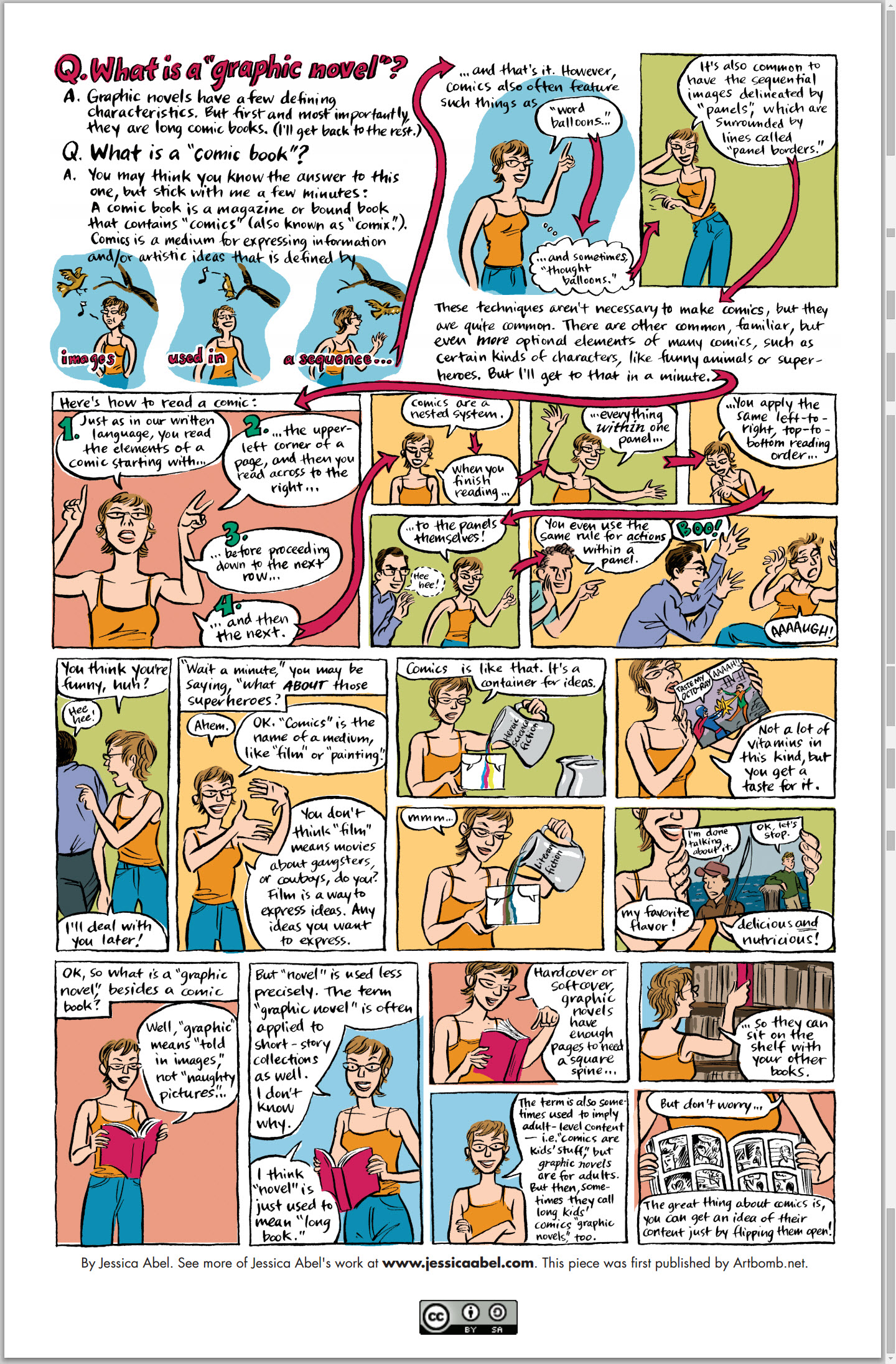 What is a ‘Graphic Novel’ by Jessica Abel Comic introduction to what comics are, how they work, and how to read them. First Row, First Column Q. What is a “graphic novel”? A. Graphic novels have a few defining characteristics. But first and most importantly, they are long comic books. (I’ll get back to the rest.) Q. What is a “comic book”? A. You may think you know the answer to this one, but stick with me a few minutes: A comic book is a magazine or bound book that contains “comics” (also known as “commix”.) Comics is a medium for expressing information and/or artistic ideas that is defined by Woman saying: Images Used in A sequence… First Row, Second Column Woman saying: …and that’s it. However, comics also often such things as “word balloons”… … and sometimes, “thought balloons. It’s also common to have the sequential images delineated by “panels”, which are surrounded by lines called “Panel borders.” These techniques aren’t necessary to make comics, but they are quite common. There are other common, familiar, but even more optional elements of many comics, such as certain kinds of characters, like funny animals or superheroes. But I’ll get to that in a minute. Second Row, First Column Woman saying: Here’s how to read a comic: 1. Just as in our written language, you read the elements of a comic starting with… 2. … the upper left corner of a page, and then you read across to the right… 3. … before proceeding down to the next row… 4. … and then the next. Second Row, Second Column Woman saying: Comics are a nested system. When you finish reading… … everything within one panel… …You apply the same left-to-right, top-to-bottom reading order… … to the panels themselves! Man 1 whispering, “Hee hee!” Man 2 saying: You even use the same rule for actions within a panel. Man 1 yelling, “Boo!” Woman saying, “AAAAUGH!” Third Row, First Column Woman saying: You think you’re funny, huh? Man 1: Hee hee! Woman: I’ll deal with you later! “Wait a minute,” you may be saying what about those superheroes? Ahem. OK. “Comics” is the name of the medium, like “film” or “painting.” You don’t think “film” means movies about gangsters, or cowboys, do you? Film is a way to express ideas. Any ideas you want to express. Third Row, Second Column Woman: Comics is like that. It’s a container for ideas. Woman holding picture of Superhero 1 saying “Taste my octo-ray” Superhero 2 saying “AAAAH!!” Woman: Not a lot of vitamins in this kind, but you get a taste for it. mmm… my favorite flavor! Delicious and nutritious! Woman holding picture of Fisherman 1 saying, “I’m done talking about it.” Fisherman 2 saying, “OK, let’s stop.” Fourth Row, First Column Woman: OK, so what is a “graphic novel,” besides a comic book? Well, “graphic” means “told in images,” not “naughty pictures”… But “novel” is used less precisely. The term “graphic novel” is often applied to short-story collections as well. I don’t know why. I think “novel” is just used to mean “long book.” Fourth Row, Second Column Woman: Hardcover or softcover, graphic novels have enough pages to need a square spine… …so they can sit on a shelf with your other books. The term is also sometime used to imply adult-level content – i.e. “comics are kids’ stuff,” but graphic novels are for adults. But then, sometimes they call long kids’ comics “graphic novels,” too. But don’t worry… The great thing about comics is, you can get an idea on their content just by flipping them open! By Jessica Abel. See more of Jessica Abel’s work at www.jessicaabel.com. This piece was first published by Artbomb.net Creative Commons Attribution 4.0 International License Share Alike License